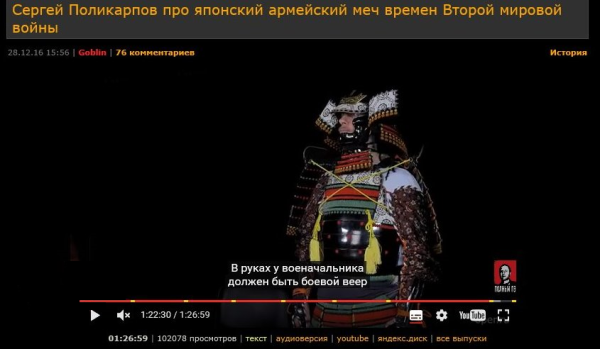 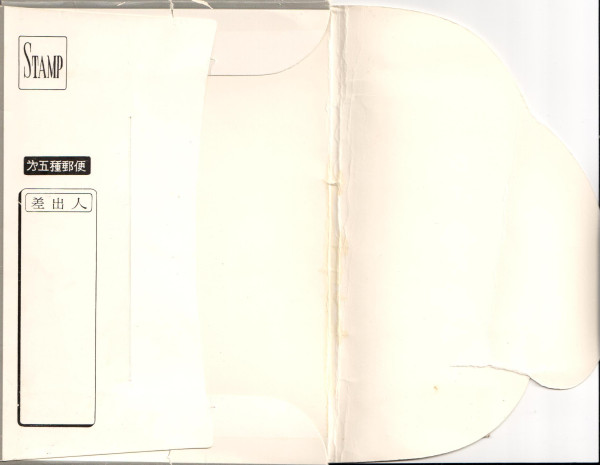 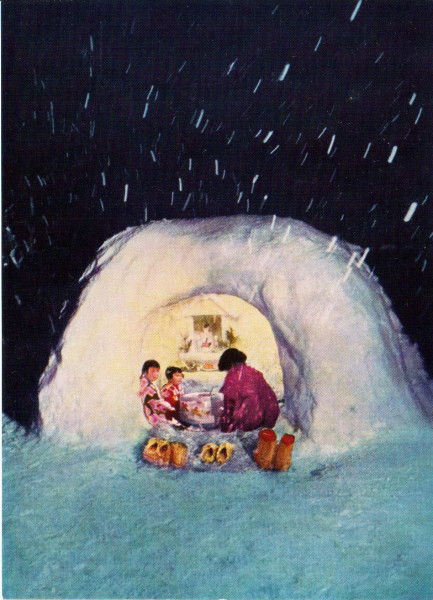 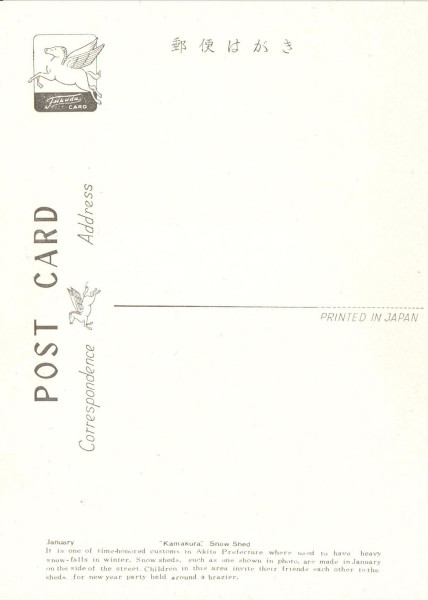 January                     "Kamakura", Snow Shed
It is one of time-honored customs In Akita Prefecture where used to have heavy snow-falls in winter. Snow sheds, such as one shown in photo, are made in January on the side of the street. Children in this area invite their friends each other to the sheds for new year party held around a brazier. 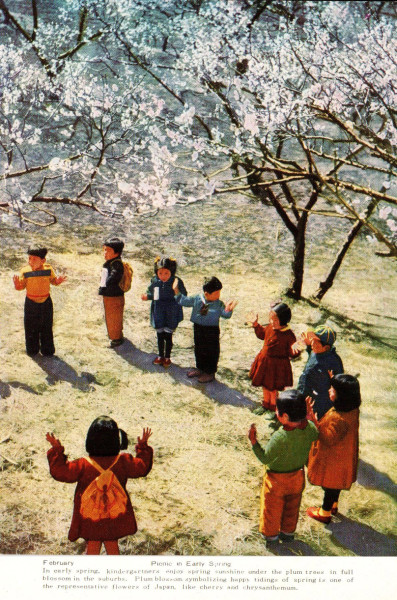 February                     Picnic in Early Spring
In early spring, kindergartners enjoy spring sunshine under the plum trees in full blossom in the suburbs. Plum blossom symbolizing happy tidings of spring is one of the representative flowers of Japan, like cherry and chrysanthemum. 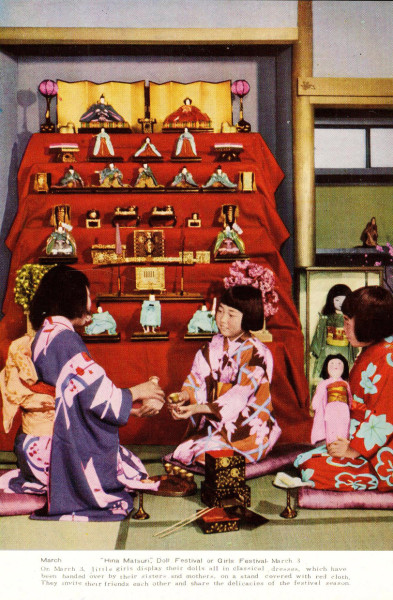 March                     "Hina Matsuri", Doll Festival or Girls Festival - March 3
On March 3, little girls display their dolls all in classical dresses, which have been handed ovег bу their sisters and mothers, on a stand covered with red cloth. They invite their friends each other and share the delicacies of the festival season. 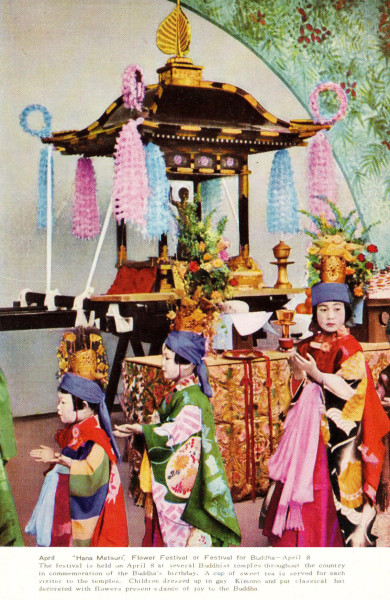 April                     “Hana Matsuri", Flower Festival or Festival for Buddha - April 8
The festival is held on April 8 at several Buddhist temples throughout the country in commemoration of the Buddha‘s birthday. А cup of sweet tea is served for each visitor tо the temples. Children dressed up in gay Kimono and put classical hat decorated with flowers present a dance of joy to the Buddha. 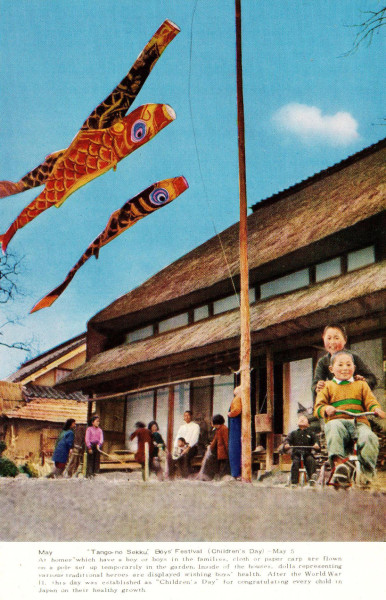 May                     "Tango-no Sekku", Boys' Festival (Children's Day) - May 5
At homes which have a boy or boys in the families, cloth oг paper carp are flown on а pole set up tempurarily in the garden. Inside of the houses, dolls representing various traditional heroes are displayed wishing bоуs' health. After the World War II. this day was established as “Children's Day" for congratulating every child in Japan on their healthy growth. June                     “Natsu Matsuri". Festivals of Summer
Even in modernized cities of Japan, such as Tokyo, Osaka and etc., children enjoy classically fashioned annual festivals of their tutelary shrines in the height of summer. Portable shrines animatedly carried around and festival floats pulled by children parade down the main streets of the towns in this festival season. 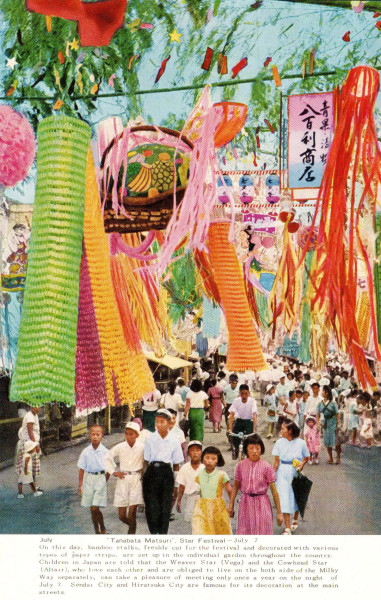 July                     "Tanabata Matsuri", Star Festival - July 7
On this day, bamboo stalks, freshly cut for the festival and decorated with various types of pарег strips, are set up in the individual garden throughout the country. Children in Japan are told that the Weaver Star (Vega) and the Cowhead Star (Altair), who love each other and are obliged to live on the both side of the Milky Way separately, can take a pleasure of meeting only once a year on the night of July 7. Sendai City and Hiratsuka City are famous for its decoration at the main streets. 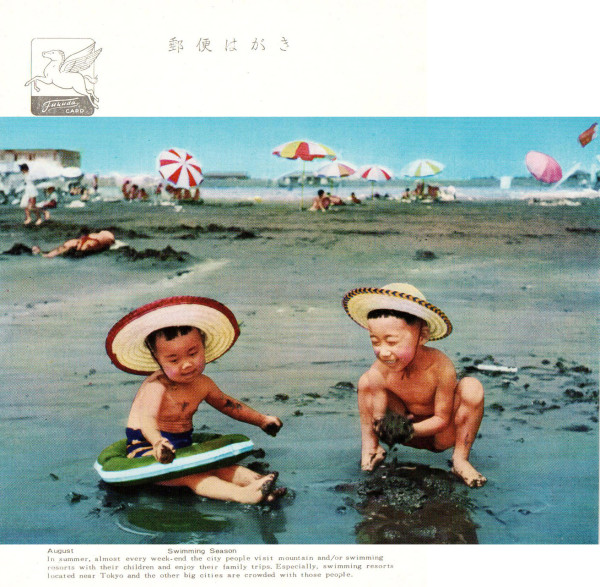 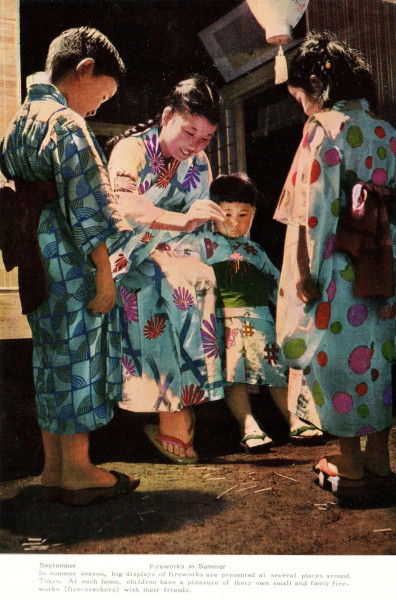 September                     Fireworks in Summer
In summer season, big displays of fireworks are presented at several places around Tokyo. At each home, children have a pleasure of their own small and fancy fire - works (fire-crackers) with their friends. October                   Best Season in Japan
Autumn is said the best season in Japan for it is neither too hot nor too cold. Children have picnics on a field with their friends and sing the joys of their healthy life on the green. 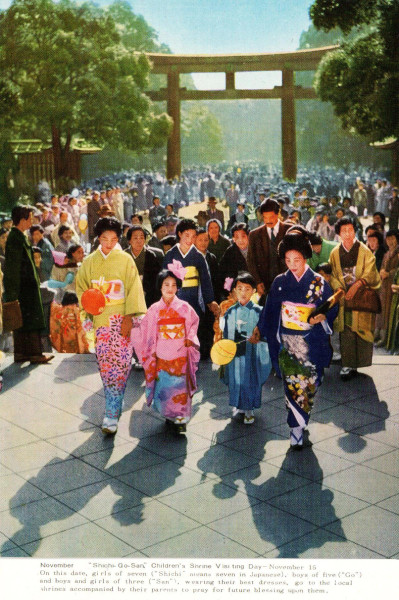 November                     "Shichi-Go-San", Children's Shrine Visiting Day - November 15
On this date, girls of seven (“Shichi" means seven in Japanese), boys of five (“Go") and boys and girls of three (“San"), wearing their best dresses, go to the local shrines accompanied by their parents to pray for future blessing upon them. 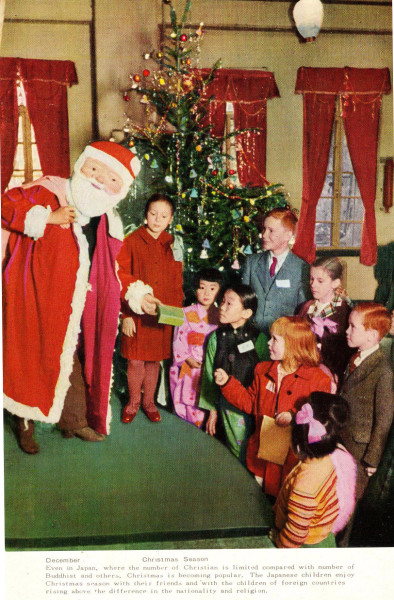 December                     Christmas Season
Even in Japan, where the number of Christian is limited compared with number of Buddhist and others, Christmas is becoming popular. The Japanese children enjoy Christmas season with their friends and with the children of foreign countries rising above the difference in the nationality and religion.
------------
З.Ы.:
Бдительная общественность загогулину